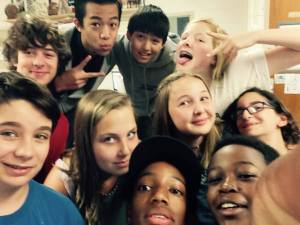 The Amtrak train persists along its southward path to Philadelphia. My husband and I have just spent a perfect Labor Day weekend with family in Jamestown, R.I. Lulled by the dependably rickety sounds of this neglected railed infrastructure, my thoughts are drawn to the place where I am not.

I retired from teaching last June. Today, Tuesday, September 8, 2015, I should be in the middle of an energetic and futile attempt to orient a dozen hyped up 7th graders about the dangers and delights of the school year ahead. Instead, I reminisce about the 18 years spent as a Middle School Technology Coordinator. It’s a five-hour, peaceful ride to Philly (if you don’t count a few infrequent interruptions by my adorable, sweet and obnoxiously well-toned seat mate who occasionally has to pee) so I have lots of time to think.

I applied for a 6th grade teaching position in the summer of 1997, but lost out to a colleague who was more experienced and could coach wrestling, a talent well beyond my skill set at the time, or now, for that matter. I was, however, offered a consolation prize; the school needed a part time person to run the new middle school computer lab. The job requirements were quite stringent. You had to be an adult who had used a computer at least once. Qualifying just barely, I reluctantly accepted.

It sounded simple enough. I was to show up at 8:00 a.m., monitor the lab (“monitor” was not specifically defined) and teach 6th grade students some basic word processing and spreadsheet skills. The fact that I had never used a spreadsheet didn’t seem to matter at the time. I had no idea what I was getting myself into.

The Turd in Question

Some of the eighth grade boys heard I was coming and they were ready. In the middle of one of my first classes, a computer farted. Yes, I said farted. I quickly discovered that one of the more technically innovative members of the class of 2002 had downloaded and installed a “plug in” on all the lab machines. The result of such ingenuity was a sound approximating that of a gaseous, bodily eruption when the enter key on the keyboard was pressed. And that was only the warning shot. Tormented by a deluge of adolescent trickeries including a student-designed webpage that featured a dancing turd named Mr. Hanky, the Christmas Poo (special thanks to the creators of South Park), I don’t know how I did it. Every night I prayed for strength. It was the first time I had ever felt truly incompetent at a job and I didn’t like it one bit.

Somehow, I survived this first year with the help of the head of technology, my colleagues and principal, and most importantly, the students. For every problem I overcame, ten more new obstacles popped up. The kids were always ahead of me. They were the accelerated students and I was the student who worked at a painfully slow pace and needed one-on-one, extra learning support. I learned so much; probably the most important lesson was that we were all learning together and from each other. Each morning I checked my ego at the door. Each day I learned something new from the kids. If they knew a better or faster way to do something, I encouraged them to step up and show their classmates. Trust me, it can be extremely humbling to have to ask an 11 year old how to do something that you cannot figure out on your own; yet I learned that in order to do my job well, it was essential that I do that, over and over and over again.

They say that timing is everything.  I began this job adventure at a time that I like to describe as the “Big Bang” of technology. The educational universe was expanding by leaps and bounds or, should I say, from kilobytes to terabytes.  Most families at our school had home computers by then.  Our school had just been wired for internet. At the time I dipped that first hesitant toe into the infinite digital pool, I was buoyed by teachers and students who were anxious to explore new ways to use technological advances and expertise to enhance learning.

Fast forward a few decades to the spring of 2015. The entire dynamic of the classroom has changed. The job I left this past spring bears little resemblance to its humble beginning; the pace with which technology continues to change learning is daunting.  I have learned so much.  I have seen some skills disappear. Handwriting is becoming an increasingly lost art in spite of studies indicating that students retain information better when they physically write it down.  I’ve also witnessed some amazing work done by students using technology. What I know for sure is that the children that I’ve taught and those being born today and in the future will have to continually learn new skills and adapt to fast changing technologies for the rest of their lives. I am very grateful to have accompanied them on a small and exciting part of their trip.

* (“Observe due measure, for right timing is in all things the most important factor.” Hesiod Greek didactic poet (~800 BC)).

3 thoughts on “gabe! take that turd off your webpage!”